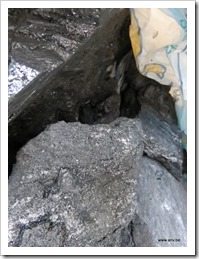 Antracite, Super Base and Black 2.0

Next step: try the colour of the Antracite coal I bought. And thàt my dear, was black. Real black. Blacker then Ivory Black. So the day Black 2.0 arrived, I mainly rushed into my studio to find out if Black 2.0 was more black then my coalpaint. And yes, it was! Not much, but it was visible. The purpose of my participation in this #sharetheblack thing, is to obtain the blackest black possible for everybody (except for heWhoDoesntWantToShare his black), so my search for a darker version continued.

Unlike Black 1.0, Black 2.0 did not consist of a pigment and a binder, but came in a potion of directly processable paint. I could cry, because I had such great results with coal and the Super Base of Black 1.0, and maybe it was no longer for sale!? Besides that, Black 2.0 was too fluid for me. So I added coal to Black 2.0 to see if it became darker, and … yep! 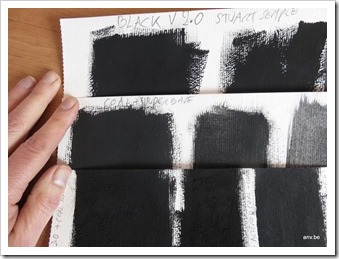 So I emailed to Semple to ask / beg if he continued to sell Super Base. And to report that his paint is even more black when you add coal to it. As I said, it’s the intention that any artist (except heWho…) has acces to a really black paint, so knowledge is there to share.

I got an enthusiastic mail back from a coworker, asking if they can use my photos and results, that they’ve been helping with a potential Black3 (Hurray!!). And if I had anything I’ve made with them?
Um, that’s for later, in part 2 ;-).

Update: you can read part 2 here